Noise is defined as all unwanted, unpleasant and annoying sounds that affect humans. Being harmful to life and health, noise is recognized as an important determinant of environmental quality.

TThe acoustic wave propagating in the elastic medium or the auditory sensation caused by this wave. It is assumed that the human can detect sounds with frequencies ranging from 16 Hz to 20 kHz. Low-frequency vibrations are referred to as infrasound while the ones with higher frequency as ultrasound. The most easily heard sounds are the ones ranging from 3 to 4 kHz. The physical aspects of sound are its spectrum, level, duration of sound and changes in time.

The characteristics in the figure below show the sensitivity curves of the human ear depending on the frequency and volume level. 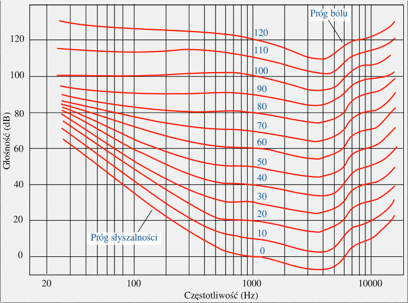 Level L (dB)
The term denotes 10 decimal logarithms of the ratio of the square of the sound pressure to the square of the reference sound pressure of 2 * 10-5 Pa. The reference level roughly corresponds to the most silent sound detectable by the human ear. The higher the sound level expressed in dB is, the louder the sound itself is. It can be assumed that the change by 2 dB is barely noticeable, the change by 6 dB is clearly audible, which means sound twice as loud.

Frequency f (Hz):
It refers to periodical or cyclical phenomena like a sound wave. The frequency of this phenomenon determines how many times it is repeated within one second. The unit of frequency is Hertz (Hz) corresponding to 1 cycle per second.

A frequency weighting
A correction curve is an inverted isophonic curve for 40 phons that is used in acoustic measurements in order to take into account the properties of the human ear which can hear best in the medium frequency range while worse in low and high ranges. The correction curve shape is shown below. 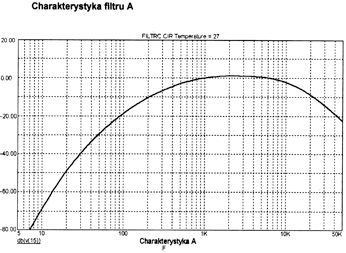 Conventional meter: a meter in which the measured quantity is the sound level determined by the exponential averaging method;

Integral-averaging meter: a meter in which the equivalent sound level is measured;

Integration meter: a meter in which the sound exposure level is measured;

Explanation of some quantities measured in acoustics in a descriptive way.

Sound pressure level L: value expressed in decibels, determined according to the formula:

Equivalent A sound level LAeq: value expressed in decibels, determined by the formula: